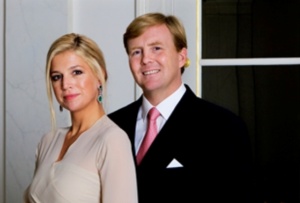 On Monday, March 11, 2013, Their Royal Highnesses Prince Willem-Alexander of Oranje and Princess Maxima of the Netherlands attended the farewell meeting, held at the  Lucent Theater in Den Haag, of the Director of the Social and Cultural Planning Office, Professor Paul Schnabel.

This afternoon Prince Willem-Alexander received the Great Atlas of the Dutch East India Company  and the West India Company from the Chairman of the Royal Dutch Geographical Society, Professor Henk Ottens, at Paleis Noordeinde.

The atlas consists of nine parts and was created by a collaboration between the Royal Dutch Geographical Society (KNAG), the National Archives, the research URU Explokart of Utrecht University and Publishing Asia Major/Atlas Major.”