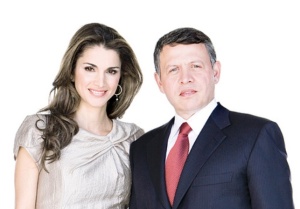 On March 6, 2013, Their Majesties King Abdullah II and Queen Rania of Jordan continued their two-day official visit to Turkey.

This afternoon, His Majesty along with the President of Turkey, Mr. Abdullah Gül, toured the TUSAS Aerospace Industries (TAI) production facilities in Ankara.  According to the Anadolu News Agency, His Majesty and President Gül, “…inspected Turkey’s first national attack helicopter, the T-129 ATAK, the two leaders also watched a demonstration flight of the helicopter.”

His Majesty also attended the Turkey-Jordan Economic Cooperation Meeting where he gave a speech:

“…urging the Jordanian and Turkish private sectors to boost partnerships between the two countries.  The king also underlined the need to promote cooperation and establish joint projects that benefit the two peoples in terms of job creation and trade exchange.”

Meanwhile, Her Majesty Queen Rania visited the Institute of Technical Education for Girls in Ankara.  During her visit Her Majesty “…listened to a briefing on the activities undertaken at the institute, which is currently operating in 14 provinces in Turkey…” according to the Jordan News Agency.

Please click here to watch a video as well as to view photos from today’s events.