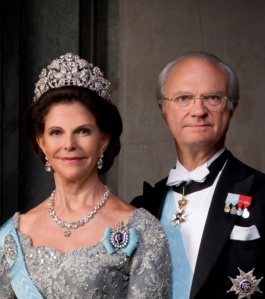 On the evening of December 11, 2013, Their Majesties King Carl XVI Gustaf and Queen Silvia of Sweden accompanied by Their Royal Highnesses Crown Princess Victoria and Prince Daniel of Sweden and His Royal Highness Prince Carl Philip of Sweden attended the 2013 Kungens Middag (King’s Dinner) for the 2013 Nobel Prize Laureates.

The gala dinner was held inside the Karl XI’s Gallery at the royal palace in Stockholm.