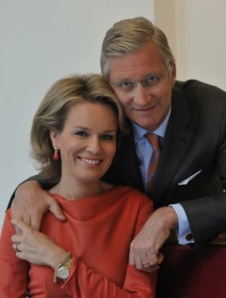 On the morning of Tuesday, November 12, 2013, Their Majesties King Philippe and Queen Mathilde of Belgium presided over a cultural cooperation meeting between the Communauté Flamande (Flemish community) and the Fédération Wallonie-Bruxelles (French community) held at the Palais de Bruxelles.

Eight Flemish and French Belgian artists, each representing their community, participated in the meeting along with the French Minister of Culture, Audiovisual Media, Health and Equal Opportunities, Ms. Fadila Laanan, and the Flemish Minister of Culture, Environment and Nature, Ms. Joke Schauvliege according to AFP.