On the evening of December 24, 2016, the Belgian royal court released His Majesty King Philippe of Belgium’s Christmas and New Year speech.

The pre-recorded message was filmed at Château de Laeken near Brussels, Belgium earlier this month.

Below is a rough translation of His Majesty’s speech:

For many of us the Christmas and New Year celebrations are a time of happiness. The illuminated streets and squares create a festive atmosphere. In the hearths reigns the joy of being together, of being together. Unfortunately this is not for everyone. For many, these are difficult days. I am thinking of those who are alone, those who are sick, those who bear heavy burdens. I think of all those who lost a loved one. And this year in particular to the victims of the attacks in Brussels and Zaventem, and to their relatives.

The events of the past year, in Belgium, Europe and elsewhere in the world, cast doubt on the future. Many people are worried about their jobs, their income, their safety. Too many young people think their lives and those of their children will be worse than their parents. Too many elderly people are wondering if they will still be able to keep up with current developments. This sense of uncertainty, disarray, even anger, can also lead to a loss of confidence in institutions.

And yet I want to send you today a message of hope. Throughout the country, the Queen and I are impressed by remarkable projects in which citizens are involved and who motivate others to become involved.

I see men and women who dare to interact with sincerity and truth. I felt this on my recent visit to a home that provides a family environment for adults with mental disabilities. To meet without prejudice and tenderness, to recognize the frailties of the other at the same time as his own. I was shattered by the energy that it releases in itself. Sweetness is a force.

I also see many examples of solidarity and generosity. In holiday camps that give their smile to children who are victims of mistreatment and harassment. In families hosting excluded people. In projects that bring together people of different generations and origins. Many do not hesitate to sacrifice their comfort to get closer to the other.

I see finally many young and old who have understood that to succeed, one must have the courage to start over. They refuse to remain on the margins of society. They do not resign themselves. They understand that to succeed is also to want the success of the other and to accept his help. I think of those who grasp with outstretched hands to learn, to resume their studies, to find a job. I am thinking of those retirees who are embarking on new meaningful projects. And the older ones who accept to be helped without seeing a loss of dignity.

All these examples express the will to build a society where one sustains one another in the ordeal and where one helps each other to succeed. They show that a more cordial society is within our reach. They deserve greater visibility. I am convinced that they can also create a dynamic that enriches the action of our institutions and builds confidence in the foundations of our democracy. This is what I sincerely hope for our country and for Europe on the eve of 2017.

The Queen and I and all our family wish you a Merry Christmas and a Happy New Year.”

On Thursday, December 8, 2016, Her Majesty Queen Mathilde of Belgium visited CPAS Namur to meet with individuals participating in the project, Miriam.

Established in 2015, the project aims to provide intensive support to single mothers “…on issues related to employment and personal development…” according to the Belgian royal court.

Thereafter, Her Majesty Queen Mathilde visited the “…High Tech Campus Eindhoven and Sligro Food Group in Veghel, for the opening of ZiN, an ‘inspiration lab’ for the food service industry…” according to RVD.

On the evening of Tuesday, November 29, 2016, Their Majesties King Philippe and Queen Mathilde of Belgium hosted a concert at the Muziekgebouw aan ’t IJ in Amsterdam, Netherlands.

On Tuesday, November 29, 2016, Their Majesties King Philippe and Queen Mathilde of Belgium continued their three-day state visit to the Netherlands.

Thereafter, His Majesty accompanied by Her Majesty Queen Mathilde of Belgium and Their Majesties King Willem-Alexander and Queen Maxima of the Netherlands attended a luncheon hosted by the Prime Minster of the Netherlands, Mr. Mark Rutte, at the Ridderzaal in Den Haag.

In the afternoon, Their Majesties Queen Mathilde and Queen Maxima visited the non-profit organization, Kamers met Kansen (Rooms with Opportunities). The organization prepares young people who “…prematurely left their school to independent living by helping them to get a job or a diploma…” according to RVD.

Their Majesties also visited Vitalis, a center which focuses on the personal guidance for children ages 5 to 18 years old who are in a vulnerable position, in Den Haag.  The two queens also visited the Cobra Museum Voor Moderne Kunst in Amstelveen where they viewed the exhibition, Pierre Alechinsky – post Cobra.

Meanwhile, Their Majesties King Philippe and King Willem-Alexander of the Netherlands presided over a roundtable discussion organized by the “…Confederation of Netherlands Industry and Employers (VNO-NCW) and the Federation of Enterprises in Belgium…” according to RVD.

Please click the links below to watch a video as well as to view photos from today’s events.

Photos courtesy of the Belgian and Dutch royal courts

On Monday, November 28, 2016, Their Majesties King Philippe and Queen Mathilde of Belgium began their three-day state visit to The Netherlands at the invitation of His Majesty King Willem-Alexander of the Netherlands.

The day began with Their Majesties King Philippe and Queen Mathilde of Belgium along with Their Majesties King Willem-Alexander and Queen Maxima of the Netherlands participating in a wreath laying ceremony at the National Monument at the Koninklijk Paleis op Dam in Amsterdam. Thereafter, His Majesty King Philippe and King Willem-Alexander inspected the royal guard.

Following the ceremony, Their Majesties hosted a reception at the Koninklijk Paleis in honor Their Majesties King Philippe and Queen Mathilde’s visit.  Guests included dozens of Dutch as well as Belgian government officials.  During the reception King Philippe and King Willem-Alexander signed a “… border correction treaty between the Dutch municipalities of Eijsden-Margraten, Maastricht and the Belgian town of Visé…” according to RVD.

Later in the day, King Philippe and King Willem-Alexander participated in the Belgian-Dutch Innovative Entrepreneurs & Finance conference while Queen Mathilde and Queen Maxima attended a symposium on urban development and bilateral cooperation.

Tonight, Their Majesties King Willem-Alexander and Queen Maxima will host a gala state banquet at the Koninklijk Paleis.

On the morning of Sunday, September 18, 2016, Their Majesties King Philippe and Queen Mathilde of Belgium accompanied by their four children, Princess Elisabeth, Prince Gabriel, Prince Emmanuel and Princess Eleonore, participated in the Dimanche sans Voiture (Car-Free Sunday) in Brussels.  Dimanche sans Voiture is a day when many Belgians ditch their cars for a day and ride their bikes where ever they may be going.  If that makes any sense.

Anyway, the royal family rode their bikes from the beautiful Château de Laeken to the Quartier St-Géry where they attended a neighborhood party with the locals. 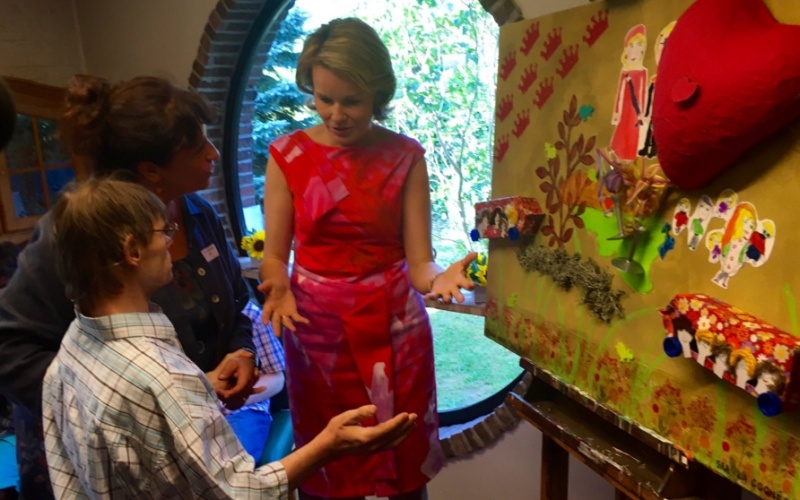 On Thursday, September 15, 2016, Her Majesty Queen Mathilde of Belgium visited Horizons Neufs in Louvain-la-Neuve to celebrate their 50th anniversary.  The Horizons Neufs is a non-profit organization and care home for adults with learning disabilities.

During today’s visit Her Majesty was given a tour of the home where she also met with staff and residents.

On Tuesday, September 13, 2016, Their Majesties King Philippe and Queen Mathilde of the Belgians visited the province of Luxembourg.

The day began with a tour of the Auberge du Vivier intergenerational center in Habay-La-Neuve.  Thereafter, Their Majesties visited the Galaxia, a business park dedicated to space applications in Transinne. The day ended with a “…reception at the town hall of Libin followed by a meeting with the inhabitants…” according to the Belgian royal court.

Please click the links below to watch two more video news reports as well as to view photos.

On Sunday, September 11, 2016, His Majesty King Philippe of Belgium arrived at the Adegem Canadian War Cemetery in East Flanders to attend the 70th commemoration ceremony in honor of the British, Canadian and Polish soldiers who died for the liberation of Belgium at the end of World War II.

Click here to watch a video news clip (in French).

On Friday, September 9, 2016, Their Majesties King Philippe and Queen Mathilde of Belgium accompanied their children — Princess Elisabeth, Prince Gabriel, Prince Emmanuel, and Princess Elenor — and His Serene Highness Prince Albert II of Monaco attended the opening of 40th Edition of the Memorial Van Damme held at the Stade Roi Baudouin in Brussels.

According to the Belgian royal court the event is “…dedicated to the Rio de Janeiro Olympic Games 2016.  [The Memorial Van Damme] is part of the circuit of the IAAF Diamond League.”