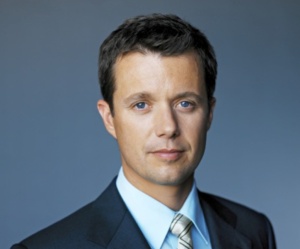 The Danish royal court recently announced that His Royal Highness Crown Prince Frederik of Denmark will participate in the 2013 KMD Ironman Copenhagen on Sunday, August 18, 2013.

The difficult race — though not as extremely grueling as the Ironman World Championships which takes place each year in Kailua-Kona, Hawai’i — consists of running, swimming, and cycling.  The crown prince is thrilled to participate in the race stating, “I look forward to competing in the race with 2,600 other participants…it will be a very special race and experience.”  Well, yeah, of course it will be.  Anyway, if Crown Prince Frederik is one of the top 50 to complete the race he will be qualified to compete in the Ironman World Championships on October 12, 2013, in Hawai’i.  Good luck, Frederik!   🙂

In other news the Danish magazine, Billed Bladet, is reporting that His Royal Highness Prince Henrik of Denmark ran over his beloved puppy with a golf cart whilst on holiday at Gråsten Slot.

The sweet little puppy, who was immediately taken to the local veterinarian,  suffered a fractured pelvis and obviously severe emotional trauma.  Poor thing.   😦

And, finally, it was announced that Her Royal Highness Crown Princess Mary of Denmark has agreed to become patron of “…the anniversary of Skole i 200 År.”

His Royal Highness the late Prince Johan Friso of Oranje-Nassau was laid to rest this afternoon in the cemetery next to the Stulpkerk in Lage Vuursche.

The private funeral service, led by Reverend Carel ter Linden, was held at the Stulpkerk with the late prince’s family and dearest friends in attendance.

After the service Her Royal Highness Princess Mabel, Countess Emma Luana, Countess Joanna Zaria, Her Royal Highness Princess Beatrix of the Netherlands, Their Majesties King Willem Alexander and Queen Maxima of the Netherlands and their daughters along with other members of the Dutch royal family returned to Kasteel Drakensteyn — residence of Princess Beatrix — to comfort each other and to mourn in private.