On the evening of September 27, 2012, His Majesty King Juan Carlos I of Spain attended the inauguration of a new container terminal at the port of Barcelona.  Whilst there the old king posed for photos, shook hands as well as mingled with very important people, unveiled a new plaque, and then left.

This morning Prince Albert II gave a keynote speech entitled, Understanding the Ocean in a Changing World, during the Ocean Acidification Symposium held at the Golden State Theatre.

After his speech, Prince Albert II participated in a panel discussion entitled, The Story So Far: Action on Ocean Acidification, along with Dr. Jean-Pierre Gattuso, Dr. Jane Lubchenco and California Congressman, Mr. Sam Farr to name a few.

During the conference, according to a press release, the sovereign prince announced:

“… the launch of a new international center to coordinate ocean acidification. At a cost of two million U.S. dollars for three years, the center, based at the International Atomic Energy Agency Environment Laboratories in Monaco, will help coordinate international research and link science and policy.”

“Supported by among others the Government of Monaco and my Foundation, an Ocean Acidification International Coordination Center has been set up in Monaco within the premises of the International Atomic Energy Agency’s Marine Environment Laboratories. It represents not only an enormous source of pride for myself but also gives me real hopes for the future.”

Today’s event was organized by the Third International Symposium on the Ocean in a High CO2 World and the Blue Ocean Film Festival.

If you are interested in watching various panel discussions from the 2012 BLUE Ocean Film Festival and Conservation Summit please click here. 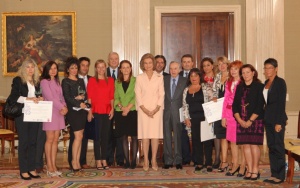 On September 27, 2012, Her Majesty Queen Sofia of Spain was at Palacio de la Zarzuela to preside over the 2012 Premio a la Acción Magistral award ceremony, “…which grants the Fundación de Ayuda contra la Drogadicción (FAD), in collaboration with the Comisión Nacional Española de Cooperación for UNESCO and BBVA, as part of the ‘Homenaje al Maestro’, to highlight the importance of educational work.”

Their Royal Highnesses Prince Felipe and Princess Letizia of Asturias were in San Bartolomé de Tirajana on the island of Gran Canaria to attend the inauguration of Día Mundial del Turismo 2012 (World Tourism Day 2012).

“Día Mundial del Turismo 2012 is being held under the theme, Tourism and Sustainable Energy: Drivers of Sustainable Development, which aims to highlight the role of tourism in achieving a more hopeful energy future, a future in which the all of the world’s population has access to modern energy services, efficient and affordable…”

“… tourism is a generator of wealth, according to the latest data, is now up to 9% of world GDP and employs 255 million people. In this sense it is also an important and growing generator jobs, which helps to alleviate the negative effects of the economic crisis, especially unemployment and especially youth unemployment.”

On September 27, 2012, His Royal Highness Prince Willem-Alexander of Oranje attended the Heinekenprijzen and Heineken Young Scientists Awards in the field of science and arts in Amsterdam.

“The biennial Heineken Prizes (each EUR 150,000, and 50,000 for the art prize) and Heineken Young Scientists Awards ($ 10,000) are available by Dr. HP Heineken Foundation and the Alfred Heineken Funds. The Royal Dutch Academy of Sciences selects the winners.”

“The CTT is a leading terminal that believes in the power of the combination of container transport by road and water.  The company offers every day or several departures from the port of Rotterdam to Hengelo and vice versa. They also transport to the ports of Amsterdam and Antwerp.”