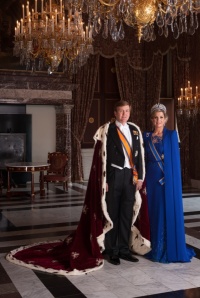 On November 15, 2013, Their Majesties King Willem-Alexander and Queen Maxima of the Netherlands arrived on the small island of St. Eustatius for a one-day tour.

The day began with a reception held in their honor at the F.D. Roosevelt Airport where they met with local officials and dignitaries.  Then, Their Majesties attended a Science Fair with “…presentations by children from five schools…” according to RVD.

In the afternoon, Their Majesties attended a gala luncheon hosted by the island’s government officials.  Soon, the reigning couple arrived at Hazel’s Plantation where they met with staff and were given a tour of the facility.

Thereafter, Their Majesties visited the St. Eustatius Historical Foundation Museum where they viewed an exhibition and attended a cultural festival held at Wilhelmina Park.