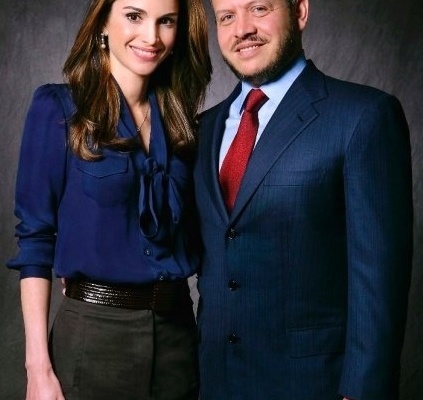 On Monday, June 10, 2013, His Majesty King Abdullah II of Jordan accompanied by His Royal Highness Crown Prince Hussein bin Abdullah II attended a celebration to mark Army Day and the anniversary of the Great Arab Revolt.

During yesterday’s event His Majesty “…bestowed medals upon several officers and members of the Jordan Armed Forces, the Public Security Department, the General Intelligence Department and the Civil Defense Department as well s injured military personnel in recognition of the services and distinguished track records…” according to Petra News.

In the afternoon, His Majesty held an audience with members of the Association of Mediterranean Ombudsman and with Patriarch Theophilus of the Holy CIty of Jerusalem.

Meanwhile, Her Majesty Queen Rania of Jordan held a meeting with “…representatives of different education stakeholders in Jordan…” who informed Her Majesty about the various issues discussed during the recent 2013 Teacher’s Conference in Amman.  The conference was organized by the Queen Rania Teacher Academy.