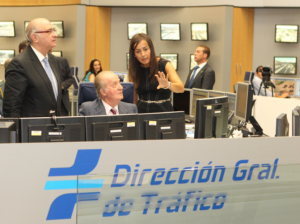 On the morning of August 30, 2012, His Majesty King Juan Carlos I of Spain visited the Centro de Gestión del Tráfico (CGT) in Madrid.  The old king was accompanied by the Director General of Traffic, Ms. Maria Segui, and Interior Minister, Mr. Jorge Diaz to name a few.

During his visit to the CGT, the old king was given a tour of the facility and learned about the “… traffic management systems from the command post…”