On Monday, December 7, 2015, Their Majesties King Abdullah II and Queen Rania of Jordan welcomed the President of Germany, Mr. Joachim Gauck, and his partner, Ms. Daniela Schadt, to Al-Husseiniya Palace in Amman, Jordan.

The purpose of President Gauck and his delegation’s two-day official visit is to pay tribute to Jordanian society’s achievement in finding shelter for hundreds of thousands of refugees; furthermore, to continue to strengthen economic and bilateral ties between Jordan and Germany. 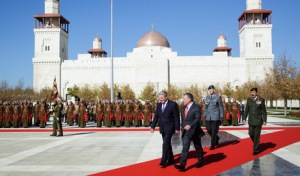 After the official welcoming ceremony and the reviewing of the Jordanian military guards His Majesty King Abdullah II and President Gauck participated in a meeting inside the palace.  Discussions focused on the Syrian crisis, education, vocational training and water, as Germany is one of the countries that provide technical assistance to Jordan in the field of water resources management and conservation.

In the evening, Their Majesties hosted a gala dinner in honor of President Gauck and Ms. Schadt’s visit to Jordan.