The countdown is on in Monaco when legendary bachelor, H.S.H. Prince Albert II of Monaco finally marries his lovely longtime girlfriend, Charlene Wittstock, on July 1 and 2, 2011.

In anticipation of their upcoming nuptials the couple have been quite open with the press these past few months and once again they decided to share with others their love story.

In the upcoming issue of Madame Figaro, the couple (mainly Charlene Wittstock) spoke with French journalist, Stéphane Bern about her relationship with H.S.H. Prince Albert II, competitive swimming, her passion for charity work, her life in South Africa, and much more.

Here is what the future princess had to say:

Marriage Is A Fairytale Come True

Mademoiselle, in what state of mind are you in these days? You only have a few weeks before your wedding with H.S.H. Prince Albert?  Do you ever get the feeling you are living in a fairytale?

It’s a very exciting time for me.  I think any woman who has a chance to be loved by the man she loves is living a fairytale.  Marriage is the realization.

What do you remember when you first met the prince?

I met the prince in 2000, in Monte Carlo, in an international swimming competition which I was participating in the backstroke event.  I had a very brief conversation with him.  He was extremely charming and expressed with a  great passion for both sprout and athletes.  Then in December 2005, a mutual friend introduced again.  And it was then that he invited me to join him to attend the Winter Olympic Games in Turin in 2006.

You recently returned to South Africa where you grew up.  What feelings did you experience when you went back?

I went back twice to South Africa.  Once in July 2010 for the World Cup, which was a great success.  As you know I am proud to be South African and very happy for my country.  then in February 2011 I went back to take part in the Midmar Mile swimming race.  It was the first time I took part in the 1600 meter race.  My former teammates encouraged me to swim the raceme and then I thought I should raise money for the Special Olympics whilst there.  The experience was extremely rewarding to swim alongside athletes with disabilities, they have so much courage.  They showed us that man can for far beyond the limits we assume.  I also had the opportunity to meet members of my family and friend that I had not seen for a long time.  We reminisced about all sorts of things.   My friends and I talked about swimming, competitions, all sorts of things.  Some of them still practice, some are now married and now have children.  Beyond the family and friends reunion it was lovely to rediscover the beautiful African sky.

You found your way into the sport of competitive swimming.  What influence has this been in your personal achievements in life?  What values has sports given you and how has it shaped your character?

I began participating in sports at the age of 8 and it was my dream to compete in the Olympics.  But, to reach that level of competitive swimming I needed discipline and determination without any flaws.  After years of perseverance and endurance, I finally reached my goals.  The competitive spirit, humility, compassion, sportsmanship, and the appreciation are values that are deeply rooted in me and will stay with me for my whole life.

In a few weeks, you’ll be the Princess Sovereign of Monaco. What role do you intend to play alongside H.S.H. Prince Albert? Will you invest in a charitable and humanitarian work?

I have always been involved in charitable works, even before I met the prince.  These missions will always be part of my life, and I do not wish it otherwise.  It is a real blessing for me to have someone in my life sharing my involvement in humanitarian operations.

You Lived for several years in Monaco.  As a South African athlete as you were so successful acclimate in the principality?  The fact that Monaco is a seaside country did it seduce you?  Have you learned French?

I spent most of my life as an athlete in Durban, where there is little difference in climate between the two countries.  I knew the seasons and adjusting to a new style of life wasn’t that hard.  the prince helped me understand the history and the realities of Monaco, and the population has shown me great kindness and benevolence to my place.  As for the French language, it is probably one of the most beautiful languages in the world.  I understand a bit and I can follow most conversations, but I believe it will take time for me to be perfect at it.

As the future Princess of Monaco you will be observed and admired.  What does fashion mean to you?  What designers appeal to you the most?  Do you like jewelry and which ones?  And the accessories?

Before coming to Monaco, I did not need to know fashion.  I didn’t know a thing about fashion.  Most of the time I wore jeans, T-shirts, and sandals.  I am not a slave to fashion and I wear jewelry for large events. 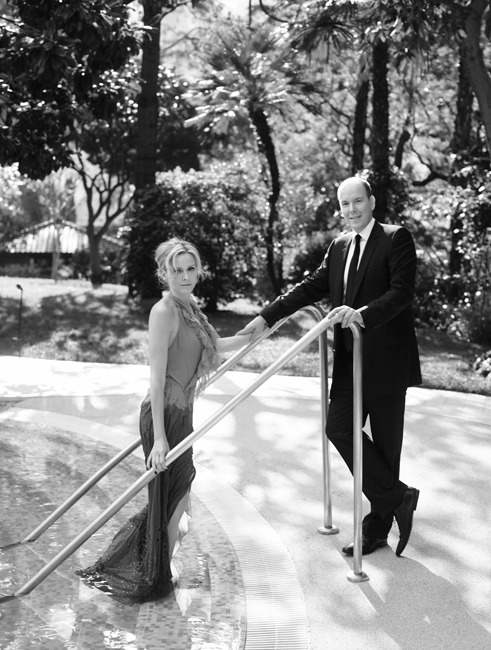 I had the great fortune to meet high personalities from South Africa that have touched me deeply including three Nobel Laureates of Peace, Dr. Christiaan Barnard, Archbishop Desmond Tutu, and of course Mr. Nelson Mandela.  I was also impressed by the charisma of former South African president, F. W. de Klerk.  I have met so many whose dedication and service to others… it has affected me so much.

The issue hits newsstands on May 28, 2011 if you are interested in buying it.