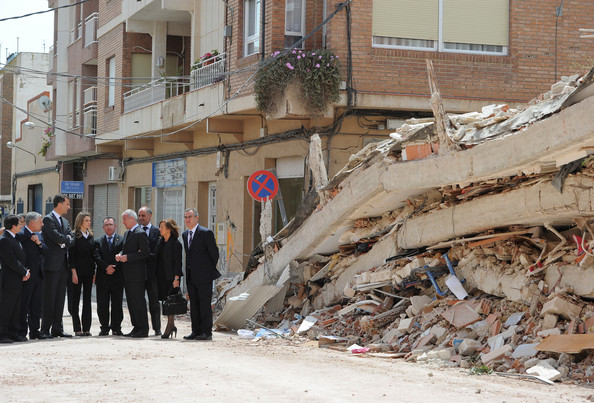 On Wednesday May 11, 2011, two devastating earthquakes — one measuring a 4.4, the other a 5.1 on the Richter scale —  struck Lorca, Spain just 3 hours south of Valencia. These devastating quakes left nine dead, hundreds injured, and many buildings as well as homes in shambles.  This afternoon, there was a funeral Mass for those who lost their lives and on hand to support and comfort the families who lost loved ones were the Prince and Princess of Asturias.

According to CBS News, T.R.H.’s Prince Felipe and Princess Letizia:

… sought Friday to comfort relatives of nine people killed in Spain’s deadliest earthquakes in more than 50 years, hugging them and shaking their hands as they slowly made their way along a long row of mourners.

Prince Felipe and Princess Letizia bent down to chat with the mourners at a crowded funeral Mass celebrated in a trade center, part of which has been turned into a makeshift refugee camp after two quakes Wednesday left many homeless in this southeastern city. Many of those in the front row at the Mass wore dark glasses.

At one point the prince stooped down to speak to a boy and affectionately ruffled the child’s dark hair.

Living in SoCal I know what it is like to go through an earthquake (believe me folks, it’s not fun.)  My heart goes out to the victims, their families, and all the people of Spain.

Now, there are photos of T.R.H.s Prince Felipe and Princess Letizia at today’s Mass; however, I do not feel comfortable posting images of grieving families… so if you want to see photos please click the link here.  To watch a video please click here.