If you are interested in watching the Rolex Masters online you may do so by clicking the link here. To view photos from the event please click the link here.

On April 11, 2011,  H.R.H. Prince William of Wales and his fiancée, Catherine Middleton, decided to make one last official appearance together before they tie the knot at Westminster Abbey on April 29, 2011.

So what did they do?  Where did they go?  Well, the couple, along with their bodyguards and other VIPS, were in Lancashire to officially open the new school, Darwen Aldridge Community Academy.   Even though it was raining the couple were in good spirits meeting the students as well as the hundreds of onlookers who cheered the couple on as they made their way through the handshaking thingy line (gawd, I hope that made sense.) 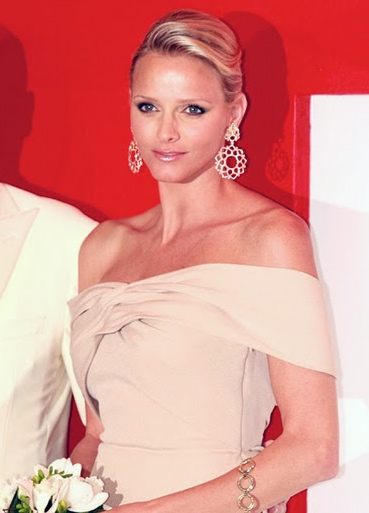 In the recent edition of the French magazine, Paris Match, there is a nice yet slightly sugary article about the future princess of Monaco, Charlene Wittstock.   The writer basically rehashes what many royal watchers already know about Miss Wittstock except for perhaps one or two new facts.

Here is a snippet from the article translated for those who do not speak French:

Today, Charlene is willing to restore the royal palace to its former glory.  Entering in this 900 year old castle, which dates back to the sixteenth century, Charlene would like to see the it t return to its originality.

She is also aware of the honor walking in the footsteps of Princess Grace some fifty years later, she can not afford to be a pale copy.  A South African Journalist recently asked her about her resemblance to Princess Grace highlighting her charisma and ethereal blond hair, she replied: ‘You can not compare two people, because they are unique! ‘

However, like Grace when she moved to Palace in 1956, Charlene was immediately found that it lacked a feminine touch. ‘We see no woman has lived here for a while. I would like to make some significant changes to the rooms.
‘Move, refresh, relieve, it is in its character.’  And it is this spirit that she would like infuse the scene and, beyond, perhaps, to Principality. Like Albert, she enjoys contemporary art.

During a trip to New York, the couple visited the Jeff Koons gallery  which the painter and sculptor shows off his very “pop art”.   In the palace today, Prince Albert has decorated many rooms with abstract paintings which are hung on the walls of the princely residence many of them over above period furniture.

To read the article in its entirety please click the link:  Paris Match (it’s in French, obviously.)  🙂