According to a press release, the Solar Impulse 2: 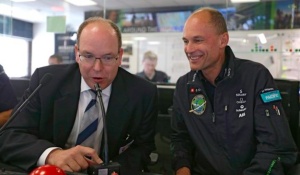 “…will land in the Japanese city of Nagoya, organizers said on June 1, as bad weather delayed a landmark attempt by a solar plane to cross the Pacific Ocean. The flight from Nanjing to Hawaii was scheduled to be the longest section of the maiden solar-powered global circumnavigation, an attempt to promote green energy…”

And, finally, on the evening May 28, 2015, the sovereign prince and Her Royal Highness Princess Caroline of Hanover attended the launch of legendary designer and author, Mr. Hubert de Givenchy, new book entitled, To Audrey with Love, held at the Galerie Ribolzi in Monte-Carlo.  For more information about last Thursday’s event please click here.