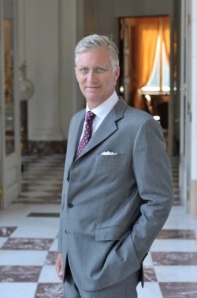 Security was on high alert this morning, Friday, November 7, 2014, as His Majesty King Philippe of Belgium visited the Musée Juif de Belgique (Jewish Museum of Belgium) in Brussels.

Last May 24, a crazed gunman from Marseille, France, stormed the Musée Juif de Belgique killing four innocent people. In a statement released by the Belgian royal court immediately after the horrific event, His Majesty noted that he was “…shocked to learn that the shooting took place this afternoon at the Jewish Museum of Belgium. He extends his condolences to the relatives of the victims. The King is outraged by this act of violence that affects very much the Jewish community “

During today’s visit His Majesty met with employees and was given a tour of the museum’s various exhibitions by its president, Mr. Philippe Blondin.