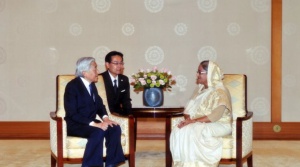 On Monday, May 26, 2014, His Imperial Majesty Emperor Akihito of Japan held an audience at the Imperial Palace in Tokyo with the Prime Minister of Bangladesh, Ms. Sheikh Hasina.

Meanwhile, Her Imperial Highness Princess Mako of Japan accompanied by the Prime Minister of Japan, Mr. Shinzo Abe, attended a “…ceremony to place the ashes of those who perished during World War II at the national cemetery for the war dead in Tokyo…” according to AFP News.