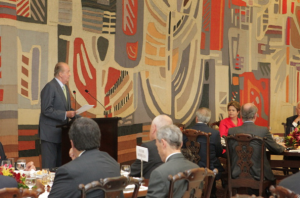 On June 3, 2012, His Majesty King Juan Carlos I of Spain arrived in beautiful Brazil alongside the Minister of Foreign Affairs, Mr. José Manuel García-Margallo.  The purpose of the trip is to “… consolidate and strengthen trade relations and investments with Brazil.”

This morning His Majesty participated in a meeting as well as luncheon with the President of Brazil, Ms.Dilma Rousseff, and representatives from Spain and Brazil held at the Planalto Palace.  During the meeting the old king gave a speech regarding financial matters in Spain stating, “…Spain is working with its European partners to stabilize financial markets, reduce the public debt…” and a bunch of other boring stuff.

Afterward, His Majesty King Juan Carlos I bolted to Chile to, again, strengthen trade relations with the South American country.