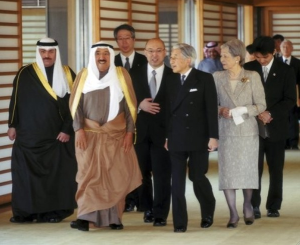 One day after having a second procedure to remove fluid from the left side of his chest, His Imperial Majesty Emperor Akihito of Japan went back to work on March 21, 2012.

This morning the 78-year old emperor, along with Empress Michiko, held an audience with Sheikh Sabah al-Ahmad al-Sabah of Kuwait at the Imperial Palace in Tokyo.  In the evening, His Imperial Highness Crown Prince Naruhito of Japan hosted a gala dinner in honor of Sheikh Sabah al-Ahmad al-Sabah visit; however, the dinner only lasted for 45 minutes according to the Imperial Household Agency.  The reason:  “It was in consideration of His Imperial Majesty’s health…” who was also in attendance.