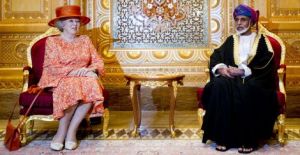 Upon their arrival the royal trio were greeted by Sultan Qaboos Bin Said as well as Sayyid Fahd bin Mahmoud al-Said, Deputy Prime Minister for the Council of Ministers, Sayyid Khalid bin Hilal al-Busaidi, Minister of the Diwan of Royal Court, Gen. Sultan bin Mohammed al-Nu’amani, Royal Office Minister at the Muscat Museum Gate.  From their the Sultan guided Her Majesty to Al Alam Palace Guest House Square, while “…a group of horsemen escorted the motorcade from Muscat Gate up to the Al Alam Palace Gate where the National Anthem of the Kingdom of the Netherlands was played while the artillery fired a 21 gun salute for the Queen.”

Once inside the Al Alam Palace Her Majesty and the Sultan as well as the prince and princess along with the Dutch delegation sat down for a meeting whereupon they discussed “…good relations binding the Sultanate and the Kingdom of the Netherlands…”  Discussions also included the role of women in Oman as well as deepening trade relations with the Netherlands.

Afterward, the royal trio had a chance to visit the Beit Al Zubair museum in Muscat.  In the evening there was a gala dinner at the palace.  Prior to the lavish gala, Sultan Qaboos  conferred the “Renaissance Grand Order” on His Royal Highness Prince William Alexander and the Sultan Qaboos Order “First Class” to Her Royal Highness Princess Maxima. In return, Her Majesty Queen Beatrix also, “conferred orders to the Sultan as well as to various ministers and officials in the Sultanate.”

To watch videos as well as to view photos please click the links below: