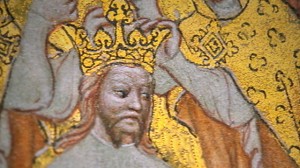 Here is the recent BBC Four documentary entitled, Illuminations: The Private Lives of Medieval Kings.  The program tells the story of the Medieval monarchy:

…as preserved through stunning illuminated manuscripts from the British Library’s Royal Manuscripts collection which contains some of the most priceless documents in our national history. Some of these manuscripts were commissioned by the Medieval Kings to burnish their legacies. Others were captured as war booty, and handed down from one dynasty to the next. Together they make up a fascinating record of the role of the king and the role of the country as it became a major power at the heart of Europe.

Well, it is Sunday, and you know the drill… it’s time for this week’s edition of Blauw Bloed.   🙂  Click the video icon below where it says 10 Jaar Willem-Alexander en Máxima