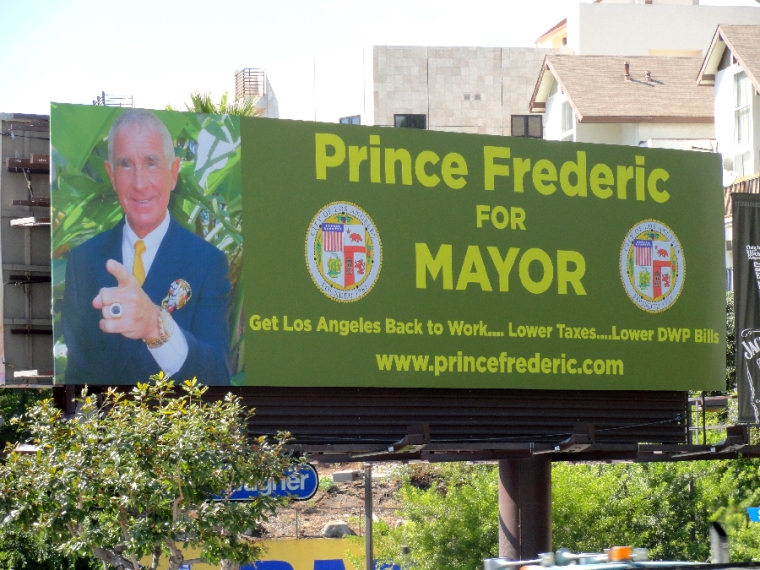 It’s been a rough year so far for the faux prince Frederic von Anhalt.  First, he announced to the world that his dear friend, Carl Alexander Prince von Hohenzollern, cancelled his wedding to his bikini model girlfriend. Then he announced that he has Shingles and then days later he was hit by a car in Beverly Hills whilst jaywalking.  Nevertheless, that is in the past and now there is finally some good news. So what’s the news? Well, he’s running for mayor here in Los Angeles!  YAY!!

Now this isn’t the first time the faux prince was in the running for a political seat.  Back in 2010 he ran for governor of California.

The faux prince says that if he is elected mayor he wants to lower utility bills, cut taxes, end homelessness because “… [I] see people eating out of trash cans every day. This must end!” as he drives by them in his Rolls Royce.

This afternoon he held a press conference to discuss his candidacy (one reporter showed up)  Click here to watch.  To learn more about his run for L.A. mayor please visit his official website here. 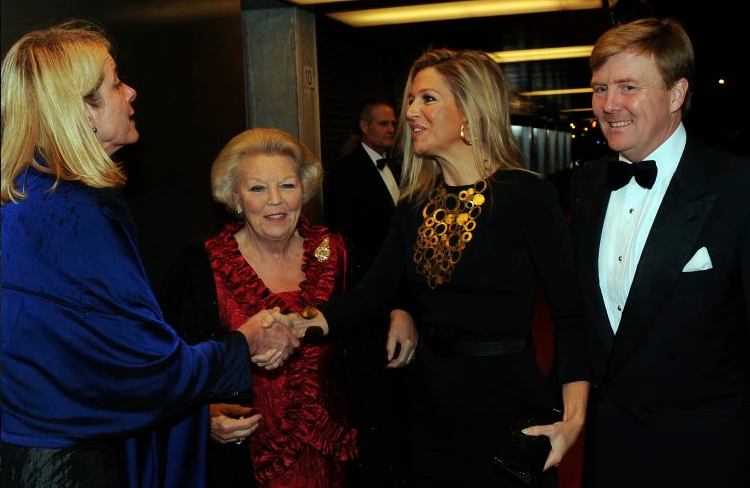 In today’s online magazine, Paris Match, there is a nice article regarding H.S.H. Princess Charlene of Monaco and her family.  Here is a rough translation for those who do not speak French:

We were waiting at a ceremonial dinner, or perhaps a cocktail of charity, dress and hair of a princess, surrounded by billionaires or members of the elite. She came in pants, hair down at a village festival with Mass ritual speech of the mayor, cocktail, and girls who waddle reciting the compliment learned by heart. For his first official engagement, Princess Charlene chose La Turbie, a village of 3200 people just above Monaco.  She came to celebrate the feast of St. Michael. Rainier and Albert have visited La Turbie often in the past, but as the prince was attending to other official duties that day, his wife offered to represent him. In La Turbie, the princess’s parents live there, and the village is not far from Roc Agel, the country home of Grimaldi’s.

A La Turbie, her attendance was supposed to remain secret. But, given the parade of people in their Sunday best, which walkers towards the church on Thursday morning, the whole village knew. While others believed otherwise. “Is Sarkozy coming? ” asked a bystander, impressed by the pomp – flags, and clusters of notable costumes – made for the occasion. The church is packed. Father Caesar Penzo, chaplain of the royal family, has also made the trip.  The town welcomes Princess Charlene in the square then she dips her hand in the holy water and makes the sign of the cross. The princess, converted to Catholicism before his marriage, smiles. She sits in the front row next to her parents, Michael and Lynette. They have unobstructed views of the the ceremony.

After the Mass, there is a reception in the hall. But first, Princess Charlene asked to make a detour on foot through the narrow streets and to the local school. Children, less intimidated than adults, are waiting in yelling: “Charlene! Charlene! ” Smiling and happy she kisses each little face that passes in front of her and even starts the conversation in French: “What’s your name?” “Who’s your friend?” In the yard, she found the little Stella, one of the bridesmaids of marriage.

In the reception room decorated with balloons and flowers, there are crowds, and you have to push chairs to make room for latecomers. After the welcome by the Mayor, Princess Charlene gets up to make her first official speech.  “I’ll speak  French to you I am sorry if it is not so good,” she apologizes, before moving onto English: “I speak on behalf of my family, to say how we been well received here. I wish you all a happy Saint-Michel!”  Then a local singer goes on stage to begin “The hymn to love,” Charlene, very comfortable, listening to the city fathers tell him the story of La Turbie and its links Monaco.

In his honor, the congregation rises for the National Anthem – as Charlene knows by heart. But when it comes around “La Marseillaise” is his father, Michael Wittstock, who sings in English, with all the power that gives it its template rugby player. He has taught children at school in Rhodesia, says he to his fellow diners, before carving out a great success by linking with “Alouette, nice Alouette.” For over a year they moved into the village in a quiet villa, Charlene’s parents were adopted. Michael and Lynette know only few words of French and Turbiasques little more than English, but it does not matter: everyone speaks their language in great actions, and everyone seems to understand. “We like it here, it’s more casual than Monaco and the people are very welcoming,” Mike slips.

Two days earlier, the local coffee shop – “my second home,” he says with a laugh – the regulars saw it land, a barbecue under the arm. The freezer of Wittstock had suffered a power failure, and it would be a shame to ruin the “boerewors”, typical sausages they had brought back from South Africa, he said. If Charlene is a vegetarian, his father remains in effect committed carnivore. Mike has installed a barbecue on the terrace of the café, and after a discussion with gestures on the best way to cut tomatoes and onions, regaled the assistance of its grilled, served with a spicy sauce of the house that estourbi taste of the natives. More lively discussion ensued about the merits of rugby and the Springboks and the team of France, and now in full Wittstock-Mania La Turbie.

On October 7, 2011, T.R.H.s Prince Felipe and Princess Letizia of Asturias were at the port of Alicante, Spain to visit the “…Volvo Ocean Race 2011-12 fleet prior to the start of the Alicante qualifying race…”  There was also a christening ceremony whereupon H.R.H. Princess Letizia became the godmother of the team, Telefónica.

Per the official website for the royal house of Spain, Casa de Su Majestad el Rey:

…during the christening ceremony, Prince Felipe and Princess Letizia were accompanied by the local dignitaries as well as others in the sailing world.  After a working meeting on the issues of craft technology and the impact economically in the region associated with holding the Volvo Ocean Race…

To read the rest of the article from Casa de Su Majestad el Rey as well as to view photos please click the links below:

On October 6, 2011, at the Musée Océanographique de Monaco H.S.H. Prince Albert II attended the 2011 Prix Méditerranéens du Journalisme Awards.  This annual ceremony, hosted for the third time in Monaco and organized by the Monaco Méditerranée Foundation, awards those who have demonstrated their brilliance in, well, journalism… yeah, it doesn’t get much simpler than that.  To view photos please click here.

This afternoon at the Palais Princier, Prince Albert II presented the “Officer of Saint Charles” to author, Professor Tim Flannery for his contribution to the environment, science, and his best-selling books.

And finally, this evening the prince will attend the Prince Albert II of Monaco Foundation Awards Gala:

Since 2008, the Awards of the Prince Albert II of Monaco Foundation rewards those who engage in an exceptional way to safeguard our planet. H.S.H. Prince Albert II will honor several international prominent personalities for their exemplary action in favor of the environment and saving the planet each of the three priority areas of his Foundation include: climate change, preserving biodiversity, access to water, and the fight against desertification.  The 2011 Awards will be proceeded by an exclusive screening of the film “Felins” to be attended by 1,000 guests.

At the royal palace in Amsterdam today Her Majesty Queen Beatrix of the Netherlands presented 2011 Royal Prize for Painting.  To read an article, in Dutch, please click here.  To view photos please click here.

In case you were wondering what exactly is Exodus House, well, it is a program that provides much-needed shelter as well as aftercare for former prisoners and detainees in the final phase of their sentence.  Exodus House also provides professional mentoring, prepares the residents for independent living as well as other social assistance. Currently there are over eleven shelters in the Netherlands.