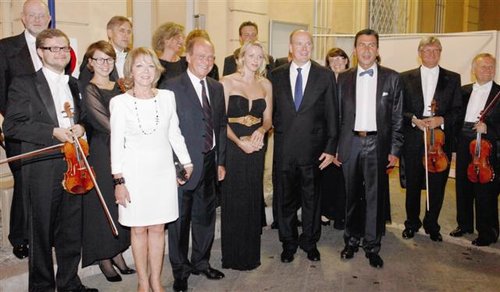 According to the French newspaper, Nice-Matin, the princely couple were warmly greeted with a round of applause when they arrived to the concert.  During the night they, along with thousands of attendees, listened to classical pieces by Mozart, Bach, Tchaikovsky, Ravel, and Mendelssohn.

Meanwhile, it is being reported by various news agencies that a certain cranky old blogger dude from California has been found guilty by the Tribunal de Grande Instance de Paris (a court in Paris, France) for “…publishing false information…” and that his personal blog contains “…libelous and defamatory work…” regarding H.S.H. Prince Albert II of Monaco.

…ordered to pay 20,000 Euros in damages plus 7,000 Euros in legal fees to Prince Albert for the publication of false and libelous materials.  An additional 5,000 Euros per day are applied for each week in which the offending material remains on the blog.

In another case, the old man was ordered to pay 10,000 Euros in damages per infraction, of which there were 6, to Claude Palmero plus 3,000 Euros in legal fees.

The old man was ordered to pay 10,000 Euros in damages per infraction, of which there were 2, to Andre Muhlberger plus 3,000 Euros in legal fees.

To read the entire article, which is a good read, please click here.

By the way, this isn’t the first time the cranky old man has been in a legal battle with H.S.H. Prince Albert II of Monaco and it most likely won’t be the last.  The cranky old man likes the attention.  To be blunt: He’s an attention whore (which is truly unfortunate because he should be spending his golden years golfing with his friends as well as eating dinner at 3 o’clock in the afternoon not obsessing over some random prince.)  There.  I said it.  I said what everyone on planet Earth has been thinking for years about him.     🙂

Photo courtesy of: Nice-Matin by E.Dulière