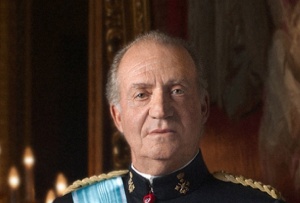 On the eve of his 75th birthday His Majesty King Juan Carlos I of Spain sat down with Spanish journalist, Mr. Jesús Hermida, for an exclusive interview.

In his one on one interview with Mr. Hermida, the old king reflects on the past, present and future of Spain, his legacy, his late father, family, youth unemployment in Spain, and more.  A highlight of the interview is when the old king spoke about His Royal Highness Prince Felipe of Asturias with whom he referred to as “… the best prepared [of all the princes of Asturias of the past], a man who has great intellect, and is a very hard worker…”

When asked about his legacy and if he is satisfied His Majesty stated:

“I feel more than satisfied, I feel fortunate that I have put forth, and have produced the Spain we have today.  However, I am gravely concerned with the problems that we currently have [I believe he is speaking about the economic crisis in Spain]…”

Okay, enough of that.  Now, the big question is why did the old king agree to be interviewed (he rarely gives interviews like this)?  My guess: He’s trying to change his and the Spanish monarchy’s image.  Essentially, it’s the old classic PR move.