On Wednesday, December 7, 2016, Her Majesty Queen Rania of Jordan attended the Women on the Front Lines conference in Amman, Jordan.

According to a press release during today’s conference Her Majesty attended the panel discussion, Asking the Hard Questions, which focused on:

“…women’s influential role in the media, and addressed the challenges they face while conducting interviews, especially when tackling a tough line of questioning with male interviewees. 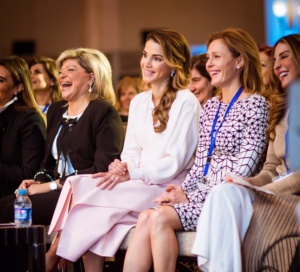 Women on The Front Lines is an annual conference organized by the May Chidiac Foundation bringing together some of the world’s most influential women, who have inspired leadership, change, and sustainability in their fields.

The Foundation, which is a non-profit organization dedicated to training, research and education on media, democracy, and social welfare, was established in 2009 by Lebanese broadcast journalist Dr. May Chidiac, who survived an assassination attempt in Lebanon in 2005. 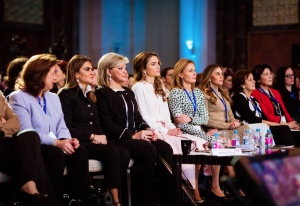 The foundation also runs an affiliated non-profit media institute that aims to foster the values of freedom of expression, human rights and democracy in media production industries by providing young professionals with state-of-the-art technical facilities and training programs.”