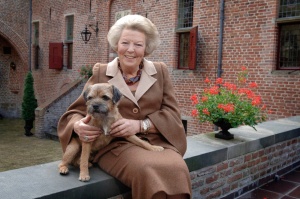 On Wednesday, September 23, 2015, Her Royal Highness Princess Beatrix of Netherlands accompanied by Her Majesty Queen Sonja of Norway officially opened the exhibition, Munch:Van Gogh, at the Van Gogh Museum in Amsterdam.

The exhibition focuses on the:

“…the parallels between two iconic artists, Vincent Van Gogh and Norwegian artist, Edvard Munch. Their visions on life and art are closely related, despite the fact that they never met. Their work is colourful, intense, expressive and radical. Their lives are remarkably similar in many ways.

For the first time, Munch:Van Gogh, studies in detail the similarities between both artists. Among more than one hundred artworks, there are several iconic masterpieces and works on special loan which are rarely lent out, such as ‘The Scream’ and ‘Madonna’ by Edvard Munch and ‘Starry Night over the Rhone’ and ‘Patience Escalier’ by Vincent van Gogh.”

Munch: Van Gogh will open to the public at the Van Gogh Museum in Amsterdam on September 25-January 17, 2016.