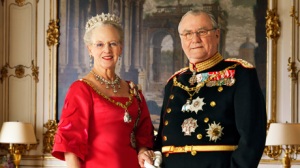 On Monday, January 6, 2013, Her Majesty Queen Margrethe II and His Royal Highness Prince Henrik of Denmark accompanied by Their Royal Highnesses Crown Prince Frederik and Crown Princess Mary of Denmark hosted the 2014 Nytårskur (New Year’s reception) for the Kongelige Livgardes and Gardehusarregimentets Officerskorps (the Royal Guards and Regiments Officer Corps), and judges from the Danish Supreme Court held at Christian VII’s Palace, Amalienborg, in Copenhagen.

Thereafter, the royal family arrived at Christiansborg Palace where they hosted yet another Nytårskur this time for members of the Diplomatic Corps according to the Danish royal court.