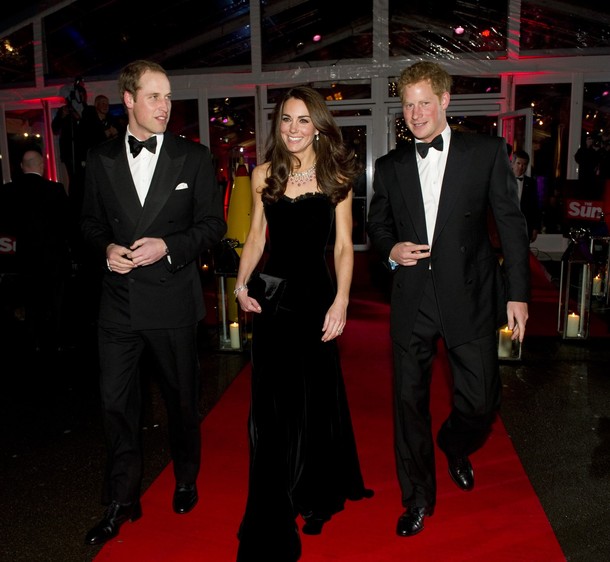 On December 19, 2011, T.R.H.s The Duke and Duchess of Cambridge along with H.R.H. Prince Harry of Wales attended the Sun Military Awards held at the Imperial War Museum in London, England.

The purpose of the event was to honor British troops.  Prior to the ceremony the royal trio mingled with servicemen and women during a reception.  The awards ceremony, also known as the Millies or Night of Heroes, was also attended by David Beckham, accompanied by sons Brooklyn and Romeo, plus others including Gordon Ramsay, Jimmy Carr, and Frank Lampard and his girlfriend Christine Bleakley.

Prince Harry, who recently returned from America where he was undertaking the final phases of his Apache helicopter training, described the members of the armed forces assembled as “…inspirational role models to all young Britons…”

In a speech to guests at the event he also spoke of his own military career:

I am a young Army officer, a serving soldier. Like my brother, I share many of the same hopes, the same aspirations to go on operations, and the same fears as all those who serve our Queen and country.

By an accident of birth, though, it falls to 564673 Captain Wales humbly to express – on behalf of my comrades-in-arms and people up and down the country – the admiration we feel for the extraordinary men and women we honour here tonight.

It’s often said of our armed forces that they are ordinary people doing extraordinary things. Well, I don’t entirely buy that. Ordinary people don’t run out under withering enemy rocket and heavy machine gun fire to rescue a wounded comrade.