That seems to be the question many have wondered these past few months.  Unfortunately, for Charlene there was another major wedding coming in 2011.  Ever since HRH Prince William of Wales announced his engagement to Catherine Middleton the media has been quite enamored by the couple.  Including the all important major question: Who will design the future Queen of England’s wedding dress?  While poor Prince Albert of Monaco and his fiancée, Charlene Wittstock, have been pretty much forgotten by the international press.

Nevertheless, there are many royal watchers who are interested to know which designer will have the honor of working with Miss Wittstock regarding the design of her wedding gown.  There are two well-known designers who are the top contenders at this point:  Mr. Karl Lagerfeld and Mr.Giorgio Armani.

Scanning through various fashion sites I really didn’t find much from these two amazing designers, but I did find some interesting couture gowns that could be a wedding gown for Miss Wittstock:

Karl Lagerfeld for Chanel Couture Spring 2010.  Okay, so, it’s not all that flattering, but the design is memorable… and every bride wants to look unforgettable, no? 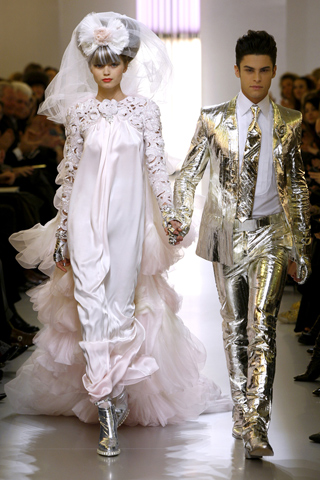 Giorgio Armani for Armani Prive.   It is already well-known that Miss Wittstock is the Ambassador for Armani Prive and a close friend of the designer (well, Mr. Armani may think so, but remember Charlene mentioned in the Tatler interview that she only has two friends.  Whether or not that includes Mr. Armani is unknown at this time.) 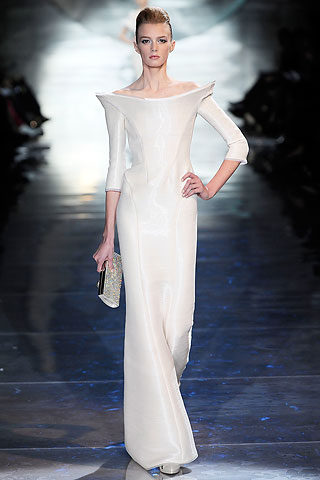 Of course, there is always Mr. Elie Saab… a favorite among many royals including HRH Crown Princess Victoria and HM Queen Rania of Jordan.

Now, John Galliano for Christian Dior is a long shot, but I think he would be a perfect to design Charlene’s dress, don’t you? 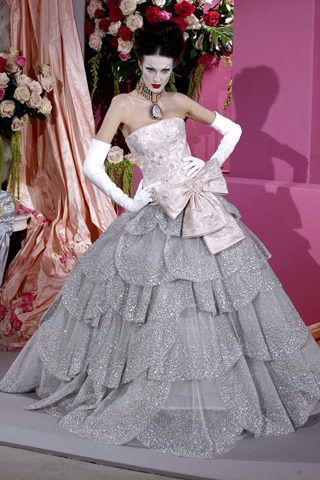 Monique Lhullier is another brilliant designer (at least I think so.  I adore many of her wedding gown designs.)  Like Mr. Galliano and Mr. Saab, Monique is a long shot for the gig.

Now, for some seriously tacky dresses from some designer who is always on that cheesy show on TLC Say Yes to the Dress.   From what I have heard, these dresses are quite popular with strippers.  Miss Wittstock, the future Princess of Monaco, would never wear such vile looking dresses.