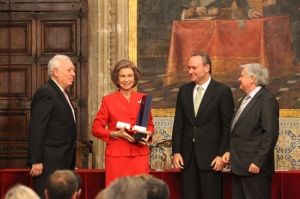 On January 15, 2013, Her Majesty Queen Sofia of Spain was awarded the XXI Premio de Convivencia de la Fundación Manuel Broseta (Coexistence Award) in recognition of her “… significant commitment to various social projects, for her role in the recent history of Spain and for her outstanding work in promoting harmony, coexistence and the momentum of democratic values.”

According to the Spanish royal court the Premio de Convivencia was created to, “… distinguish those individuals, organizations or groups who have excelled in defending the values of freedom, justice, coexistence, and respect.”

Today’s ceremony was held at the Palau de la Generalitat in Valencia and was attended by the Minister of Foreign Affairs and Cooperation, Mr. José Manuel García-Margallo, the Government Delegate in Valencia, Ms. Paula Sánchez de León, and the Mayor of Valencia, Ms. Rita Barbera to name a few.